Cause of Death: Seeking Refuge. An Incomplete List. – The Project

In the past 25 years over 35,000 people seeking refuge in Europe have died on their way there or when they arrived.

On the occasion of International Human Rights Day on December 10, 2018, we want to publish the list of the dead (the documented cases) in book form. The list was compiled by the organization UNITED for Intercultural Action in Amsterdam. Most of the deceased are unnamed. Survivors have given us some names that we have also included. Our intention is to cast a light on the people that they were to help others better grasp the scale of this tragedy – and to grant the debate about refugees and death a human face.

The book spanning more than 300 pages is supplemented by short portraits of some of the deceased, survivor reports and contributions from prominent supporters of the project.

The first edition will have a print run of 10,000 copies. On December 10, 2018 it will be distributed at no cost to associations, initiatives and projects, but also to retail stores, in order to reach as many people as possible. After December 10, the book will be sold for 5 euros each.

The Europe-wide network UNITED for Intercultural Action, based in Amsterdam, has been keeping the list of proven cases of people fleeing to or already in Europe since 1993. The organization runs the list under the heading of “documented deaths of refugees and migrants due to the restrictive policies of ‘Fortress Europe’.” UNITED consists of 550 organizations from 48 countries – the support of these organizations makes it possible to continue the list.

The Turkish artist Banu Cennetoğlu has contributed significantly to the visualization and publication of the list since 2007. She suggested that the list be published in the German edition of the Berlin newspaper Tagesspiegel in 2017 and in the English edition of the British newspaper The Guardian in 2018. And she has had the list put on display in many European cities, most recently in Liverpool during the Biennale of Contemporary Art.

The Book (available in German only)

Kristina Milz, born in 1988, is an award-winning freelance writer and historian. She divides her time as a writer between Munich, Berlin and the Middle East.

Anja Tuckermann, born in 1961, is an author who has written novels, stories, theater pieces, libretti and picture books. Her work has won multiple awards and has been translated into 13 languages.

The publishing house Hirnkost Verlag was founded in 2003 by the Archive of Youth Cultures and is still owned by association members, authors and the foundation Respekt!. Its publications focus on youth and subcultures along with issues relating to migration and refugees.

The project blog offers background information about the topic and the project itself, publishing statements from supporters and listing multiple partners, bookselling locations and more.

In order to support the project, we have started a crowdfunding campaign through which books, etc. can be pre-ordered. You can also view a video by both project initiators here.

Instead of yelling at each other left and right, we need to enter into a dialogue in order to live together peacefully in a society filled with different opinions. We can and must talk about a lot of things, but we have to do it in a language that respects the dignity of everyone involved. A true dialogue only works if everyone uses respectful language. Human beings are human beings. You cannot call them anything else. We need to understand each other and do everything we can to maintain the integrity of our society and what it stands for: a compromise between security and freedom with which everyone can live.

We must openly agree on the fact that the dignity of human beings is inalienable. That applies to every human being. And human rights are not negotiable. People in need of protection need to be protected. It is universal. People in mortal danger must be saved. If the alternative to saving dying people means their death, it is not an alternative we can discuss. The rule of law must be predictable and reliable. And that law may not be bypassed, bent or broken.
We can only enter into a constructive dialogue and move forward in the question of how our coexistence can succeed if we respect these principles. What do we have to do for it? What must we demand in order to get it?

We want the debate about refugees and migration to be guided once again with respect for the people affected by it, a debate that we must also carry on with them.

We want to return to the conversation about the essential things that will help us get along together in this country.

We want to ignite a Germany-wide, better yet a European-wide discussion.

The Reason for Translation

We are translating our project description into many languages – the languages of our European neighbors and as many native languages as possible of the people who have fled to Europe. We want you to know about our project. You can reach us via flucht@hirnkost.de. Unfortunately, because we are a small team, we can only respond to emails in German, English, Greek and French. 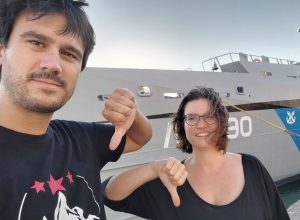